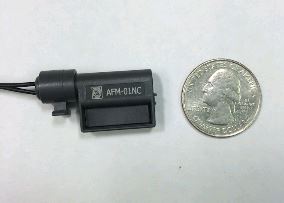 Designs utilizingfans with “smart” controls optimize the fan performance, while also minimizing energy consumption. Smart thermal controls can reduce power consumption by as much 30%, while reducing noise levels, as the fans only operate at full speed when needed.

Tachometer output, for example, provides design engineers with an accurate means of monitoring and reporting a fan’s rotational speed, as well as indicating if the fan’s speed falls below a certain RPM. This can be used as an alarm trigger or indicator by monitoring the fan speed to determine relative temperature. Typically, the tachometer output option is available as either a 5V TTL signal, or as an “open collector” signal.

Airflow monitors provide a cost-effective method for monitoring and maintaining proper airflow in AC and DC fan/blower applications. These modules can indicate airflow or lack thereof with an optical LED and/or audible-alarm when airflow falls below 8.2 ft/s due to fan filter clogs or interference with the fan blade. Able to mount via clip or clamp to any grill, airflow monitors are field retrofittable and can install perpendicular to the front or the intake side of the fan. With a long-operating life of more than 100,000 cycles, airflow monitors are rated to IP20, NEMA 1 certified, and have an operating temperature range of -20°C to 50°C.

DC fans and fan trays can be equipped with locked-rotor alarms indicating whether a fan is running or has stopped by transmitting a fail high or fail low output signal, minimizing fan downtime and averting an overheating situation. A PWM option also allows users to digitally control the speed of the fan through an existing bus system or PLC.

AC Fans or fan trays with thermal speed control employ a thermistor-controlled circuit that increases fan speed only when the temperature rises above a determined set-point. This reduces overall energy consumption by lowering fan speed when temperatures within the enclosure are below the set-point. Thermistor control circuits can be mounted directly in the fan hub or remotely mounted via a lead wire, and can be positioned anywhere within the enclosure, giving design engineers the flexibility to regulate fan speed based on ambient temperature in a specific area. The constant speed function senses variable input voltage, which causes variations in power output, and maintains the fan’s constant speed regardless of input voltage fluctuations. 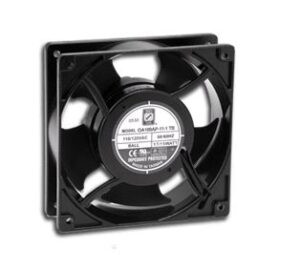 Lowering the Volume
Low-noise fans in refrigeration units, coolers and range hoods are being used to perform different functions while reducing the amount of noise normally present in older product designs. Low-noise fans are often selected for refrigeration and wine cooler applications to prevent condensation yet not contribute significantly to audible noise levels.

Condensation can build up on the inside of these units, forming not only on the glass, but within the enclosure itself. The use of an internal IP55-rated fan creates just enough air movement to prevent condensation. The same situation exists in store refrigeration units. Available in both AC and DC configurations, low-noise fans are employed in these applications not only to prevent condensation build-up, but also to minimize the noise level and reduce power consumption.

Harshest Environments
Components exposed to harsh environments including high heat are susceptible to failure over time, with fans being no exception. The classification of the insulation system is based on the lowest rated component in the system, and in many instances may be the fan. The materials and parts specified in the construction that affect the insulation class include the motor winding, the wire and the insulation on the wires, the enamel coating on the magnet wire, as well as the visible parts of the fan or fan tray such as the frame and impeller.

In white goods applications, AC and DC fans must be capable of operating within extreme temperature ranges, from cold freezers to extremely hot convection ovens. Different materials and designs are available to achieve the necessary performance and reliability across a variety of applications. 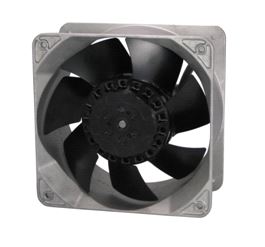 Image: All-metal fans, like the one shown above from Orion, are capable of employing high insulation Class F materials for use in high temperature oven applications

All-metal AC fans satisfy size, power and compatibility issues in the most rugged white good applications, such as HVAC and commercial deep fryers. All-metal fans are resistant to high temperatures and corrosive compounds, which may facilitate longer life expectancies in harsher environments.

Conclusion
With more capabilities available than ever before, including higher temperature ranges, speed controls and tachometer output signals to name a few, manufacturers of white goods are using fans as a means of providing increased functionality, maximizing energy efficiency and decreasing end unit cost.