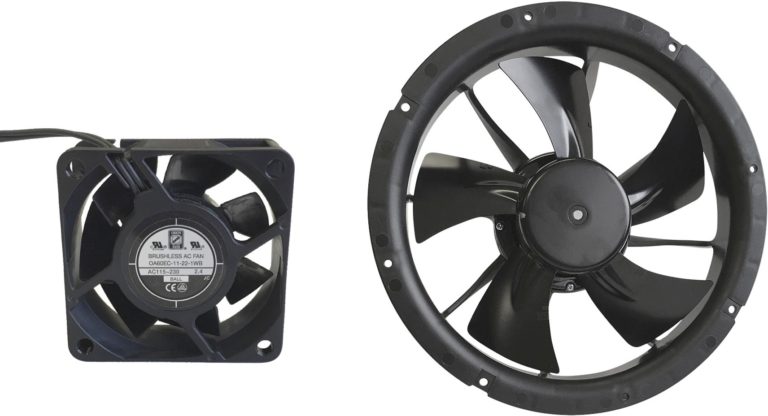 Energy conservation is of ever increasing importance in today’s world. About 25% of the primary energy consumption in the residential and commercial sectors is used by electric motor-driven systems and components in appliances and equipment. Replacing existing equipment with advanced energy-efficient motors results in a substantial reduction in energy usage and cost.For today’s demanding applications that require increased electrical efficiency,EC (electronically commutated) fans represent a significant advancement in power savings technology, providing cooling and air flow solutions.

What Are EC Fans

EC fans are powered by brushless DC motors, which are also known as EC motors. Due to its inherent design that uses permanent magnets to generate a secondary magnetic field rather than copper windings, DC motors can be up to 30% more efficient than AC motors . Brushless DC motors are typically 85-90% efficient while brushed DC motors are generally in the range of 75- 80% efficient; the brushed motors lose efficiency from brush friction. The increased efficiency of the brushless motor means that less energy is lost as heat, while more energy is turned into rotational force and therefore power. 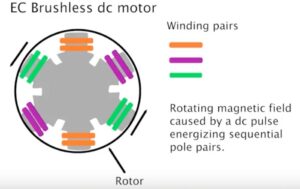 EC motors are controlled by external or onboard electronics that convert the incoming AC power signal to the DC voltage needed by the motor. The electronic circuitry performs the function of the mechanical commutation that switches the direction of the current and the magnetic field polarity to induce the motor’s rotation. As adjusting the power to the EC motor controls the EC fan speed, thereby improving performance, the design allows for more accurate and efficient motor control. 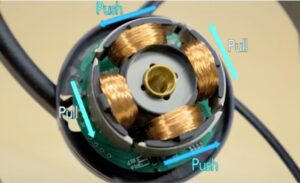 Why Use EC Fans

High efficiency EC fans have gained popularity and are being used in applications where there is a need to meet energy efficiency regulations, yet they offer other advantages as well. EC motors avoid the sparking and potential electromagnetic interference of brushed motors. They have longer service life due to the smaller heat losses and lower operating temperatures. The lower operating temperature means that the fan does not have to do extra work to remove wasted heat that is generated by the motor itself. EC motors offer a wide operating window of fairly constant efficiency over a range of speeds due to their variable fan speed control, when compared to AC motors, which tend to have peak efficiency at a single speed. In addition, EC motors require little to no maintenance and provide increased reliability. Since EC fans have lower operating costs, this leads to shorter payback periods for new equipment.

EC fans are ideal for use in major home appliances such as refrigerators, freezers, ovens, range hoods, microwaves, dishwashers and clothes washer-dryers. 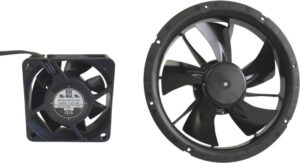 Originally used only in high-end appliances, they are now used in high volume/mass market appliances due to their energy savings advantages (i.e., their higher efficiencies). Additional applications may include air conditioning units, heat pumps, furnace fans, dehumidifiers, beverage vending machines, automatic icemakers, commercial appliances, commercial chillers, duct fans for ventilation, condenser units and extraction fans for removing smoke and exhaust. However, the biggest uses for motor-driven elements in both the residential and commercial sectors are refrigeration and HVAC (heating, ventilation and air conditioning).

Government eco-design regulations and marketplace requirements for energy efficiency standards are driving design considerations, in the consumer appliance market.Energy efficiency has become one of the performance specifications for new appliances. The high electrical efficiency of EC fans aids in meeting these requirements.

In the U.S. market, the Department of Energy (DOE) is responsible for upholding the minimum energy efficiency standards for household appliances that were established in 1987 as the National Appliance Conservation Act. Under the Federal Trade Commission falls, labeling appliances with the ENERGY GUIDE, which lists energy consumption, efficiency and operating cost information. The ENERGY STAR label, a voluntary program under the Environmental Protection Agency, has even more strict requirements on energy savings. The Building Technologies Office of the DOE has outlined potential energy savings using EC motors in commercial and residential equipment.

While others are in process, some energy conservation standards have been established so far.

Examples of some of these standards are as follows:

Several energy conservation standards have been established, and others are under consideration:

Home appliances, those that operate continuously, such as refrigerators and freezers, provide the best opportunity for energy savings. Improvements on features such as seals and compressors, the usage of vacuum panels for added insulation, and the switch to LED lighting made some reduction in energy consumption for these appliances. The best opportunity for energy savings offers the use of EC motors and fans. Fans and motors are used both inside the refrigerator, to circulate air around the coils and maintain specified temperatures, and outside, to cool air around the condenser.

Range hoods provide another opportunity for using EC fans. While not in continuous operation, the function of a range hood, or exhaust hood, is to remove heat, steam, fumes, smoke, odors, grease and airborne particles in the area above a cooktop by means of an electric fan. To remove all these potential contaminants while not being so noisy that it is never used, the fan needs to be sufficiently powerful . In a more energy-efficient way EC fans provide both of these functions. As the appropriate fan speed can be selected as needed, Dual-speed range hoods provide even greater energy savings.

Washer-dryer combos and Clothes dryers (which, while more common in the European market, are growing in popularity in the U.S. market) are a third example of home appliances where EC fans provide a great benefit. To remove moisture from the clothing EC fans are used to bring hot air into the dryer . The humid air is either sent out through an exhaust vent or passed by a heat exchanger to remove moisture through condensation before more hot air enters the dryer. Increases in air flow performance are provided by EC fans, and this improves the energy efficiency of these appliances, while their lower noise level improves customer satisfaction.

Central air conditioning systems use several motors, one each for the compressor, the outdoor fan and the indoor blower. To circulate air throughout the ductwork a similar indoor blower is used in furnace systems. Replacing existing AC fans with more energy- efficient EC fans offers the highest potential savings due to the variable fan speed motor, although maximum energy savings can only be achieved if the entire system, including the compressor, is designed for variable speed. Also, running a furnace fan at a reduced speed may require it to operate for a longer time period, reducing some of the savings.

To meet the more stringent energy efficiency standards in place EC fans are being used in both the U.S. and European markets. EC fans can be used as drop-in replacements for less efficient AC fans, by maintaining the same interface between the fan and the appliance. EC motors can drive both axial and radial fans, as needed by the specific application. Orion Fans will be introducing a family of EC fans and blowers offering low power, dual speed, energy-efficient cooling solutions. Ranging in sizes from 60mm to 280mm, some of these EC series fans feature universal voltage input making them easy to design in for a wide variety of applications. Enabling customers to meet energy-consumption requirements from agencies like ENERGY STAR, they offer energy savings of up to 50%. Additional models and sizes of EC fans will be available from Orion Fans.